There are a lot of petitions out there in the wide world of conservation and once you weed through them to find the most effective, during our busy lives, we choose the most convenient ones that require just a few clicks of a mouse and keyboard and “Boom!”, your voice is heard, your vote is counted. Then, along comes an innovative idea that combines the fun of selfies and importance of international trade protections for vulnerable shark and ray species!

In 2012, Hannah was approached as the Outreach Manager of then Shark Savers, by a group representing Yale University and Pew Charitable Trust about a grassroots campaign based on one little flat cutout of a hammerhead named Stanley who had the big job of representing smooth, great and scalloped hammerhead proposal for listing on Convention on International Trade in Endangered Species of Wild Fauna and Flora (CITES) Appendix II, restricting the trade of these species. Just like his inspiration, Flat Stanley, Shark Stanley sent home photos to the group as he traveled to multiple countries, “visited the top of Mount Kilimanjaro, the deserts of Morocco, the islands along the Mariana Trench, the glaciers of Antarctica, and went diving in the Indian, Pacific, and Atlantic Oceans”, according to this blog on the campaign's evolution. The photo collage made it to the CITES meeting and raised such positive attention for the shark proposals that were eventually voted into the convention!

Now, the campaign has grown into a coalition of 50+ organizations, reaching 10,000 young people in more than 135 countries through social media campaigns, educational materials and outreach (http://sharkstanley.org/campaignandteam/).

In 2016, Shark Stanley is back with a few new friends for CITES Conference of the Parties (CoP17) starting this September in South Africa. Shark Stanley, Tala Thresher, Silky Shark and Mobula Ray are here to raise support for their own proposals at this meeting and they need your help to spread the word. They are collecting images from around the world as another visual petition to show the global support to protect shark and ray species. 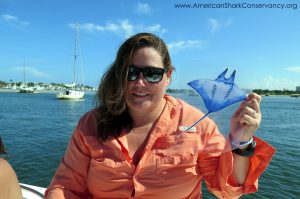 ASC is proud to join awesome groups like the PEW Environment Group, Manta Trust, Marine Megafauna Foundation, Epic Diving and the Atlantic White Shark Conservancy in supporting this campaign and will work hard to broadcast the message across all our channels! So, take a second, download, cutout and snap a pic of you and each of these awesome characters, post them on social media with #SharkStanley and BOOM! your voice and vote will count!

To get involved, start here: http://sharkstanley.org/cutouts-1/

For the story of Shark Stanley, visit: http://www.sharkdefenders.com/2013/03/the-evolution-of-shark-stanley.html