Another outreach event at the Tortuga Music Festival done and dusted! When I told my friends that I had to "work" at the festival (their air quotes, not mine), they assumed that we'd be sipping cold beers and listening to music on the beach over the weekend. In reality, being one of a select number of ocean conservation non-profits to participate in Rock the Ocean’s Conservation Village is a huge privilege and a LOT of work! The science conducted by the Bimini Shark Lab in the Bahamas and here in Jupiter combined with public outreach facilitated by ASC is crucial to the conservation of sharks and opportunities like this is imperative to continuing both our missions.  We had to come up with interactive demos to capture the fascination of concert-goers that effectively translated why sharks are important to study. That is why I was in a home improvement store late Friday night before the festival punching a traffic cone. Thinking up creative ways to demonstrate how we collect data on sharks in the field can be tricky and luckily I am surrounded by people with clever ideas. After weeks of planning, a million emails and Skype calls, we decided on a timed work-up challenge for booth visitors including these tasks to mimic our large coastal shark data collection:

3) Cut off a fin clip and put in specimen bag

Working up the Lab's hammerhead, the competition was fierce!

That brings me back to the traffic cone. We discovered that a medium-sized traffic cone resembles shark skin in thickness and toughness. By filling the cone with rags, spray painting it grey and laying it on the side, it could be tagged repeatedly, simulating the casey tagging of a large coastal shark. We kept record of the fastest times on the leaderboard. It was a fun way to engage them through friendly competition while learning about why we collect these data and what we do with them. Bikini clad girls and shirtless guys packed the booth during both days, playing Our Cards Against Humanity: Shark Science Edition (which includes answers such as “presenting data at a conference in your underwear” and “Guy Harvey riding a dolphin made of glitter”) and manual tracking our little lemon sharks. We created a little commotion when we staged a mock work-up of Oceana’s dusky shark (one of their staff in a full costume) by chasing her around and tackling her to the sand. She was a great sport! 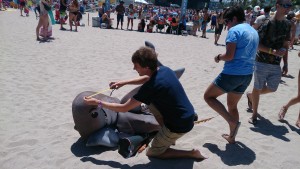 Events like this are a lot of hard work, designing activities, setting up, tearing down, and the volunteers you work with can make or break it. This year’s team was outstanding with great energy and creativity from start to finish. In the end, I think the team can admit that it is not a terrible way to spend a weekend. People often ask how they can support shark conservation and volunteering your time and various talents can make a big impact at events like this. If you are interested in volunteering or think you have a great outreach idea, email info@americansharkconservancy.org. With record breaking attendance estimated at 75,000 people, we definitely made an impact in teaching some of them the importance of science, conservation and sharks for the health of our planet!