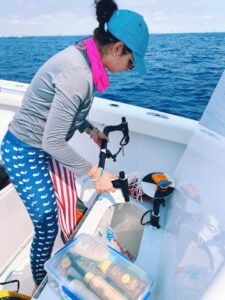 Deborah (Santos de Azevedo) Menna has a BSc in Biological Sciences with certificates in Geographic Information Systems and Environmental Science at Florida Atlantic University. During her undergraduate years, she participated in several research experiences and trained to become an AAUS scientific diver. She completed a marine science externship with National Geographic Society & The Nature Conservancy. Menna is also a research assistant at American Shark Conservancy (ASC) based in Jupiter, Florida. With ASC she assisted in the study of the post-release mortality rate of shore-based angling of Great Hammerhead sharks. She is also a project manager for ASC’s "Shark Surveys" project, which is a long-term monitoring program to investigate human-centered and environmental impacts of local shark populations. This is the first project in Florida to utilize any long-term evidence-based methodologies focusing on shark species’ diversity and populational vulnerability. In December 2021, she was named a National Geographic Young Explorer, the prestigious title only given to 25 audacious change makers around the globe. Menna is currently working at a respected firm as an Environmental Scientist, conducting surveys on protected species. Her goal is to use her experiences as a multicultural shark researcher and scientist to inspire a new generation of diverse marine biologists from under-resourced and marginalized communities that will champion conservation. 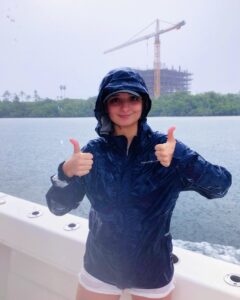 Deb is happy working in (almost) every condition.